The history of the Estey Organ Company is a complex story which traces the roots of industrialization in the Northeast, the beginnings of modern marketing, and the democratization of American music-making. Below is a very brief chronology of the Estey Organ Company. For a comprehensive examination of the company, we recommend the book, Manufacturing the Muse by Dennis Waring.

1846 Origins of the Estey Organ Company

Samuel and Joseph Jones arrived in Brattleboro and began producing hand-crafted melodeons. They were soon joined by Riley Burditt.

After several changes of ownership and modest success, Jacob Estey bought a share of the melodeon company as a business venture.

Jacob Estey and H. P. Green took over the company as partners. By 1859, Estey & Green were manufacturing 30 melodeons per week. With the arrival of the railroad in Brattleboro, instruments could be ordered by mail and shipped all over the country. The most popular model produced by Estey & Green was the Perfect Melodeon. 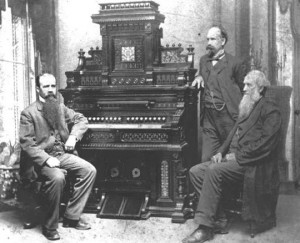 Jacob Estey took over sole ownership of the company. Needing capital for expansion, Estey took on additional partners the following year. Estey introduced the Cottage Organ into the Estey line. By the end of 1865, Estey was producing approximately 100 instruments per month in 30 styles.

The company reorganized with Jacob as president, son-in-law Levi Fuller, vice president, and son Julius J. Estey, secretary. By the end of the 1860s, the Cottage Organ had supplanted the melodeon in popularity. By 1869, production exceeded 300 instruments per month.

After two fires and two floods, Estey relocated its manufacturing to slate-shingled buildings on Birge Street in Brattleboro. (One of the buildings is now home to the Estey Organ Museum.) Land on the hill behind the factory was made available to employees to build their homes.

The company celebrated the production of its 200,000th organ. The following year, the output reached 13,000 instruments.

Upon the death of Jacob, Julius J. became president of the company. In 1892, the 250,000th organ was produced with a large celebration; organ 300,000 was produced before the turn of the century.

With the popularity of reed organs beginning to wane, Julius J. turned to the production of pipe organs. Well-known organ builder and inventor William E. Haskell was brought from Philadelphia to head the pipe organ department.

Jacob Gray Estey and Julius Harry Estey, sons of Julius J., took over the business upon the death of their father. By 1916, reed organs and pipe organs contributed equally to the company’s income.

During the Great Depression, organ sales dropped dramatically. The company went bankrupt and assets were sold. In 1933, Jacob P. and Joseph G. reformed the company. Although the production of reed and pipe organs continued, the company experimented with various types of specialty instruments. During World War II, Estey produced most of the folding organs used by U.S. Army chaplains.

Full control of the company returned to the Estey family with Jacob P., his nephew Wilson G Estey, and son-in-law Robert Cochrane, Jr. as partners. By the early 1950s, the company had manufactured nearly 500,000 reed organs and over 3,000 pipe organs.

Through the late-1950s, the Estey Organ Company continued to manufacture primarily compact pipe organs in the Brattleboro facility.

After a number of corporate changes, the company, now Estey Electronics, Inc., moved to California, signaling the end of the reed and pipe organ manufacturing in Brattleboro.

The Estey factory buildings in Brattleboro were sold and the contents destroyed.