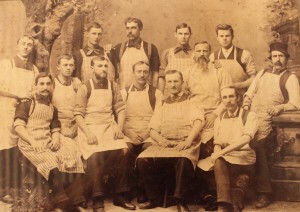 The Estey Organ Company employed a large workforce, many of whom were highly specialized craftsmen. For many years Estey was the largest employer in the State of Vermont. Estey employed master woodcarvers, designers, engineers and inventors, many of whom who came from Europe to work for Estey.

It was clear that Jacob Estey valued his workers and recognized their contributions. Dolge (as cited in Waring) described the nature of the relationship between Estey and his workers:

Jacob Estey was a man of firm character, molded in the school of adversity from his earliest childhood, but, perhaps because of this own sufferings, he became a very sympathetic employer and enjoyed the respect and love of his employees.

It is not surprising that during his lifetime, Jacob Estey encountered no major labor disputes. Estey developed a sense of community among his workers. After a devastating flood in 1869, the company purchased a large tract of land in Brattleboro to re-build the factory. The new factory buildings were designed with fire prevention and fire fighting in mind. On the land behind the factory, workers were offered lots on which to build homes. This area, known as Esteyville, became a village in which Estey employees and their families lived, worked, attended school, recreated, and worshiped. Waring summarized:

The few records that do exist regarding working conditions and family life suggest a progressive factory atmosphere and a healthy community environment.